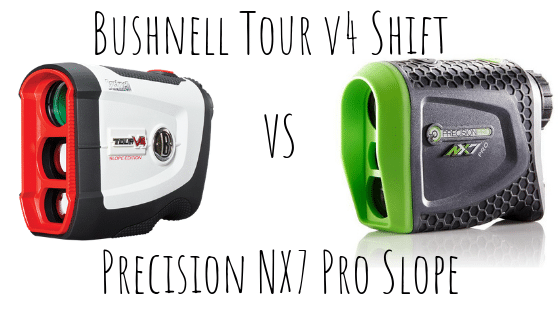 Today we are doing a head to head between two of the most popular rangefinders available today, the Bushnell Tour V4 Shift vs Precision NX7 Pro Slope.

Bushnell for years has been the industry leader for rangefinders. Bushnell are widely regarded as the best of the best when it comes to laser rangefinders. However, competition is heating up the last couple of years with Precision Golf storming onto the scene and putting their mark on the rangefinder market.

The Precision NX7 Pro launched into the market with extreme success and continues to grow in popularity. Precision’s rangefinders are to rival Bushnell’s performance but be fraction of the cost. This is why Precision Golf was launched.

We started with a simple question, “Why can’t anyone seem to make a quality rangefinder at a reasonable price?” There are plenty of rangefinders on the market, some are even excellent, but they’re overpriced. Ours Isn’t.

For the sake of this comparison I will be comparing the slope model of the V4, the Tour V4 Shift & NX7 Pro Slope as they are the most evenly matched.

The Bushnell Tour V4 is not brand new, it was actually released a couple years ago. But it still sells like hot cakes. D’ya know what? I’m not surprised.

The Tour V4 was a big upgrade from the Bushnell V3. The V3 rangefinder was much smaller and looks a lot more dated.

The Bushnell V4 just looks cool. Bushnell really took the time to design a cool eye catching rangefinder. The white and black body with the red face on the scope looks amazing and will appeal to many.

I’ve mentioned in previous posts (Best Rangefinder Reviews 2019) that I am a huge fan of this. I just love it, I really do. I like the bright green and the black contrast. It just works for me.

Both of them have very different looks that will appeal to different golfers, depending on personal taste.

Design wise, both Bushnell and Precision have out a lot of thought into the rangefinder. The ergonomic designs has the player in mind while holding the rangefinder. With built in grips placed where you hold the rangefinder, you get a little bit more control and of course comfort while getting your yardage.

Comparing the Bushnell tour v4 shift vs NX7 Pro on performance, I think they are closely matched when it comes to accuracy. Both rangefinders are accurate to +/- one yard. Which I think is more than enough accuracy for amateur golfers. So there’s not much to separate the two here.

However, the speed of yardage readings is noticeable. I found the V4 Shift to lock onto the flagstick quicker and JOLT (Vibrate) than the NX7 Pro.

Don’t get me wrong, the NX7 Pro isn’t exactly slow, it’s brilliant. But this is a comparison post comparing the Bushnell Tour V4 Shift vs NX7 Pro; so I feel I should let you know.

The Tour V4 Shift & NX7 Slope are evenly matched at locking onto flags. Both models can get accurate yardage and locked on pins (Vibrate) from 400 yards away.

The more premium Bushnell Pro X2 can lock onto flag sticks up to 450 yards away.

To be honest I thought the ability to lock onto yardages that far out was more for rangefinder manufactures ego’s and bragging rights.

But it actually can be a little useful for lay ups. You can get your distance to the flag on a Par 5 to help lay up to your desired yardage for an approach shot.

It is something that would be the difference between choosing one rangefinder over the other? No. Not for me anyway.

Both the Tour V4 Shift & NX7 Pro have slope features that can be easily switched off. Since they can be switched off means they are legal for competition play.

Both give you the actual yardage and plays like yardage. You can easily switch between standard and slope mode making it legal for competition play.

Are both these rangefinders waterproof? Ok now this was interesting to me. Now this really surprised me.

The Bushnell Tour V4 Shift is not waterproof. The Precision NX7 Slope however is waterproof.

I was really surprised the V4 Shift wasn’t waterproof. When this was released, it was there premium rangefinder.

Now if you are from a country with warm summers and little rain fall, well this might not bother you. I’m from Ireland. We can have four seasons of weather in one round of golf. If I’m buying a rangefinder, I need a waterproof one, simple as.

Unless I have a top of the line waterproof golf bag that I know won’t get wet inside, I need a waterproof rangefinder.

Any golfer reading this post from Ireland or the UK will understand the weather conditions that we play in. Rain is never too far away, no matter how nice it is. I have rain gear permanently in my golf bag.

For me, this is a deal breaker. Regardless if the Bushnell V4 outperformed the Precision NX7; I need the waterproof rangefinder which would be the NX7. For the money I’d spend on the Bushnell, I would be devastated if it got wet and liquid damage. The warranty won’t cover that either.

Now if you are really keen on a Bushnell rangefinder and also need one that’s waterproof, I would look at the Bushnell Pro X2 (Review here).

However it will cost you around $529 (time of this post). I actually did a post recently comparing the Bushnell Pro X2 to the Precision NX7 Slope, you can find that HERE.

I really like how Precision supply a replacement battery with each rangefinder. You might not need to use it but it handy to have if one does break down the line.

OK. Price is a major factor for the majority of amateur golfers. Let’s see how each one matches up.

The Bushnell Tour V4 Shift (Slope model) comes in at $359.99 on Amazon. $20 cheaper than on Bushnell’s own website here.

However, the Precision NX7 Pro Slope is sold at a very pleasing $229.99. That’s pretty amazing in my opinion. Considering how well it performs against the top brands.

Both rangefinders also come with a two year warranty, so that’s also not a deciding factor really.

$130 is big cost saving when you compare the Bushnell Tour v4 Shift vs Precision NX7 Pro Slope. You can put it towards clubs, lessons or something non golf related also of course.

Which Would I Pick? The Tour v4 Shift or NX7 Pro Slope?

I think you can guess. The fact the V4 is not waterproof is a major deal breaker for me. I’m living in Ireland; I need a waterproof rangefinder.

If you’re in a warmer country like the US, Spain and so on with nice summers and very little rainfall, it probably won’t be an issue for you. But it is for me.

Also, I can’t justify paying an extra $130 for a rangefinder not waterproof, but also barely out performs the NX7 Pro Slope.

Yardage range (400 yards) and accuracy( +/- 1 Yard) are exactly the same, the only thing that’s different is the speed at which the Bushnell get’s the reading.

Is that worth passing over the NX7. No way. I don’t think so anyway.

Two quality rangefinders, but if I had to choose between the Bushnell Tour v4 Shift vs Precision NX7 Pro Slope, I would have to go with the NX7.

Disclaimer:  Please note that some of the links on thegolfinglad.com are affiliate links.  I will earn a small commission if you decide to make a purchase from one of the websites I recommend.  These commissions allow me to purchase and test products that I recommend. i only recommend products I believe in and don’t get paid any money to post about products. Please research each company before making a final purchase and only buy if you really believe the product or service can help you achieve your desired end result.

Any cookies that may not be particularly necessary for the website to function and is used specifically to collect user personal data via analytics, ads, other embedded contents are termed as non-necessary cookies. It is mandatory to procure user consent prior to running these cookies on your website.